“Twigs & Twine & Tasha Banes” starts out with the aforementioned Tasha Banes checking into a B&B in Wyoming. She uses some combination of magic and witchcraft to get her necklace to lead her to the B&B’s storm cellar; while searching for something, she gets stabbed in the stomach.

Back in the bunker, Dean is very obviously rattled and upset by their latest run-in with Cas, and insists that something happened to him– that who they saw last night wasn’t Cas. While he’s trying to figure out how to get Cas back and Sam starts pondering over how to try and fix the Colt, they get a call on one of Mary’s phones.

The call is from Alicia Banes and her twin brother Max who need help finding their mom, who’s been, “on a hunting trip, and hasn’t been home in a week.” Alicia is worried, but Max is more annoyed, thinking that their mom is fine and just caught up in a hunt. Regardless, Sam and Dean head to Wyoming to help them out.

Before they leave, Dean calls Mary to let her know what’s going on, and asks her to call him, even if she can’t make it out to help. He says that it’d be good to talk to her, and it’s so clear that he misses her–hear that? That’s the sound of my heart breaking. It breaks even more when we see Mary ignore the call in favor of watching Ketch torture a shapeshifter who’s taken Mary’s form. She’s clearly disgusted with the way Ketch decides to go about things, but decides to hold her tongue for the time being.

When Sam and Dean get to Wyoming, Max and Dean go check out the Impala while Alicia and Sam have a heart-to-heart, and we realize that they’re both the black sheep of their family: magic is the bond between Max and their mom, while hunting was the bond between Dean and their dad. They make their way to the B&B, and after Sam gets shafted by a creepy dude outside who won’t return his wave, one of the first people to greet them is Tasha Banes, who had presumably been killed in the cold open. We’re the only ones who know that, though, so for the next few scenes we’re treated to Banes family bonding and Dean holding a wine glass like a 21-year-old who’s never had a drink before (it’s adorable, highly recommended viewing). 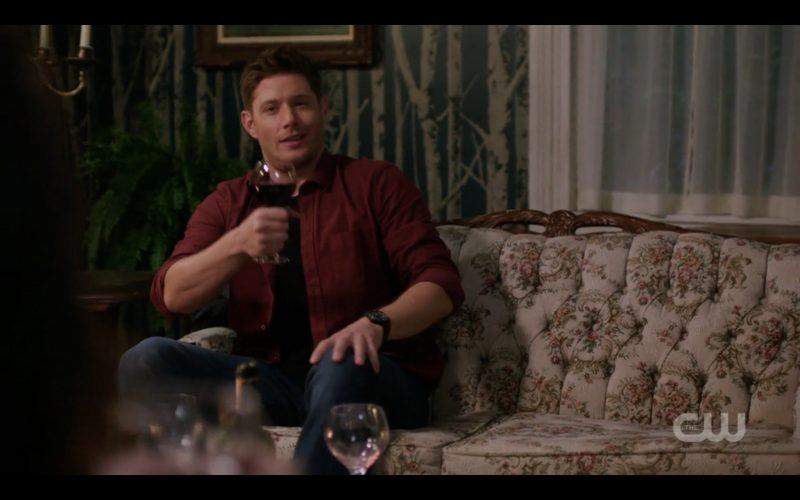 Sam returns to the B&B with food for them all, but he’s also got a missing persons flyer for the man who didn’t waved back: turns out, he’s been missing for a month. A red flag if I’ve ever seen one, so Sam and Dean head out to the storm cellar where they saw the man to check things out. While they’re doing that, we learn more about the gross hobbies of an equally gross woman who was ridiculously rude to Tasha when she entered the B&B: she’s working on a weird stick-person that’s eerily reminiscent of The Wicker Man (Christopher Lee version, obvs.).

Back at the British Men of Letters’ bunker, Mary finally calls Dean back and apologizes, saying that she wants to be there for him and Sam, and will be, but that she needs to finish this first. Dean doesn’t get this message, though, because he’s too busy stumbling upon dead bodies with their hearts ripped out in the storm cellar, one of which is Tasha’s. Max, who had been heading out for a date with a bartender he met earlier, saw the light in the cellar and went to check in with the Winchesters, which is how he found out that the person still upstairs with Alicia isn’t their mother.

While Max is dealing with the death of his mother and Sam and Dean are doing their best to console him and figure out what the hell is going on, Mary’s doing a little detective work of her own. She suspects that Ketch is up to no good and stumbles upon Mick’s dead body, and then a room with tracking info for her, Sam, Dean, Eileen, Claire, and Garth. She calls Dean immediately to tell him they have a problem, which is when Ketch finds her. They fight and Mary kicks some ass before Ketch manages to tase her in the back.

Meanwhile, Dean and Max learn the story of the woman who’s making people into these creepy wicker people she calls dolls: she’s reaching the end of her life and will go to hell unless she can find someone to take on the burden of her magic before she dies. Tasha was killed for refusing to take on the magic, and the woman put her heart in one of the dolls, which is who they’d been schmoozing with earlier. She offers the power to Max, saying that he, his sister, and their mother could be together forever, but Dean shoots her before Max can say yes.

When they get back to the other room with Alicia, Tasha, and Sam, though, they find Alicia stabbed by the wicker version of her mother, bleeding out fast (which, why can’t they use magic to save her? There must’ve been something they could’ve done, honestly). She dies, and their wicker mom is destroyed because Dean killed the witch, and Max is heartbroken and stunned after having his family ripped away from him in one fell swoop. Sam and Dean want to stay to help with the funeral, but Max tells them to go, that he’ll take care of it.

As it turns out, the Banes’ are like the Winchesters in more ways than one: Max can’t fathom living without his sister, so he turns her into one of the wicker dolls, too, and they run off to continue their hunting lives, with Max promising Alicia he’ll explain everything.

Shortly after they leave the B&B, Dean gets the latest voicemails from Mary, and starts making a beeline for the British Men of Letters bunker. Mary is there, restrained in the same chair as the shifter who had taken her form earlier. She’s convinced that Ketch is going to kill her, but before he can answer, Toni Bevell (remember her? Torture-happy lady from the beginning of the season?) says they would never kill her because she’s an asset, and that they have plans for her.

This episode had all the makings of a story I’d love: written by Steve Yockey, the new writer on staff who’s been nailing every episode lately; directed by the one and only Richard Speight, Jr.; the return of the Banes witch twins; a classic monster of the week. And parts of it were good, but on the whole, it’s not gonna go down in the rewatch category for me.

Max and Alicia were two interesting characters reduced to nothing more than painfully obvious parallels to the Winchesters. This could’ve been a really great monster of the week: the monster (both the witch and Ketch) was creepy, something we’d never really seen before, the writing and pacing were good, but instead we got two women of color killed (and turned into wicker dolls, no less, which, what the hell), and from the looks of things next week, Eileen might not have much time left, either.

They should know better; they should be doing better. It’s really disappointing, but unfortunately, not all that surprising.

In conclusion: help us, Robbie Thompson–you’re our only hope.