Well. That episode was…a solid 97% garbage, to put it mildly.

We start out in England with two young boys named Timothy and Michael entering a school called Hendricks, and judging by the weird capes they’re wearing and the headmaster who bears a striking resemblance to Dolores Umbridge, the episode’s writers were trying (too hard, by the way) to create some kind of Harry Potter vibe. The Umbridge wannabe leads the boys into a room with a plastic tarp covering the floor, which is always a good sign, and tells them that only one of them will “matriculate to the next level of training.” She sets a blade on the table and leaves them to it, waiting outside for a few moments until Michael leaves the room, bloody and holding the blade.

This little British kiddo, we soon learn, is Mick, who was having a flashback to his clearly less-than-stellar childhood, at the start of his time with the British Men of Letters. A little later on in the episode, the flashback resumes with Timothy trying to convince Mick that they both could escape unscathed, but Mick is having none of it, and after some internal deliberation, follows the BMOL’s infamous code and kills his best friend.

Meanwhile, Sam and Dean are FaceTiming with the fabulous Eileen, who’s helping them track down Dagon and Kelly. Long story short: she’s still looking for info and will be in touch, and she and Sam are cute–even Dean thinks so.

When the brothers return to the bunker, Mick is waiting to tell them about the nephilim, and is less than enthused when he learns that Lucifer’s baby is old news to everyone but him. Soon after this, Mick gets a call from Dr. Hess, who’s apparently the Umbridge lady from earlier, and she tells Mick that he needs to speed things up to get Sam, Dean, and the other American hunters on board, or else Ketch will take care of things and they’ll all start fresh. Not exactly the most comforting thought. 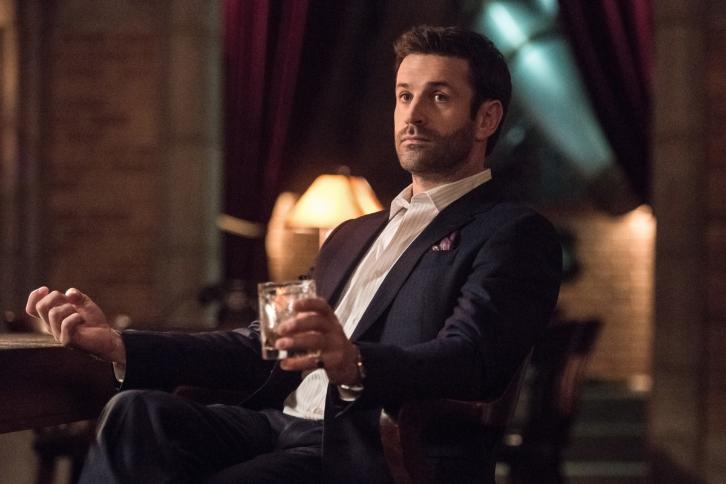 While Sam, Dean, and Mick are trying to figure out what to do about the nephilim, Kelly demands that Dagon take her to a doctor to make sure her baby is safe. Dagon is 100% against this–who knows how Lucifer’s kid will show up on an ultrasound–but eventually concedes and brings her to an overly cheerful doctor. He’s brainwashed by Dagon to tell Kelly everything is fine, and Kelly leaves with fabricated reassurances that she’ll be fine.

It’s not a Buckleming episode without three to five half-baked plotlines all awkwardly strung together, so we’ve also got Lucifer submitting to Crowley, telling him that he won; he’s the true king of Hell. Crowley is delighted by this, eating it up, but it’s painfully obvious that Lucifer has a plan, and it doesn’t involve Crowley being King of Hell at all.

Mary and Ketch are also still hunting together, and we get a quick glimpse of them fresh off a hunt before switching back to Mick. He’s got a visitor sent from Dr. Hess herself, a guy named Reny Rowlands who graduated top of his class at Henricks (no one cares, as both Eileen and Dean tell him later in the episode). He tells Mick that he’s there to “help,” and sips conspiratorially from a teacup, like all British people do.

Eileen has arrived at the bunker with more information that could lead Sam and Dean to Kelly and Dagon. She ran the license plates of every car that drove by the warehouse in Idaho before it burned down, and caught the plate of someone named Dermitt, who’s been missing for over a year. She tracked him down and caught him disposing of the body of Kelly’s doctor, who he killed in order to cover Dagon’s tracks. Before stabbing Dermitt in the heart–much to Dean’s approval–she also got Kelly’s phone number from him–very much to Sam’s approval. Sam’s so smitten in this episode, guys, it’s real cute.

Sam calls Kelly, pretending to be an assistant and telling her that she needs to come back to the clinic to discuss something that came up in her test results. Kelly agrees and manages to sneak out of the house while Dagon is out. Before she enters the clinic, Dean picks her up and takes her to a meeting point, where Sam, Eileen, Mick, and Rowlands are waiting.

Kelly is still determined to have this kid, even though she knows Lucifer used her. Before they can get too far into the conversation, though, Dagon shows up and tosses everyone aside, preparing to bring Kelly back to the house. As she’s leaving, Eileen manages to grab hold of the Colt and fires–she could be the hero! It’s totally going to hit Dagon…until it doesn’t. Dagon disintegrates before the bullet can touch her, and instead, it hits Rowlands, killing him in seconds.

Eileen is stunned, and even though he clearly wasn’t Rowlands’ biggest fan, Mick is angry and upset, and turns his gun on Eileen, saying that because she killed a man of letters, she has to die, according to the code. Sam and Dean aren’t having any of that shit, and it seems to be a combination of Sam talking Mick down with Mick having flashbacks to his younger days at Hendricks that cause him to change his mind and let her live.

Next up, we get the completely unnecessary post-sex scene between Ketch and Mary, which is awkward and forced and destined for bad things further down the line. Don’t get me wrong, Mary is a strong, kickass, independent lady who can have sex with anyone she pleases, but something about her and Ketch just seems…wrong.

Back in the bunker, Eileen is heartbroken and ashamed of herself for killing a human. Sam and Dean try to comfort her, and Sam tells her it was a mistake, using the sign for mistake as well, which I swear will be the end of me, it was so perfect, and apparently Eileen thought so, too, judging by the hug she gave him.

To wrap up a couple of other plot points, Dagon tells Kelly that her baby is strong, and that she’ll die, because giving birth to a nephilim is always fatal. Dr. Hess also visits from across the pond in order to fix the issue of American hunters being out of control. She tells Mick that Eileen will be found and killed as per the code, and that as rebellious hunters, the Winchesters will be investigated and executed if found guilty (and according to Mick, hunters are always found guilty). This is the last straw for Mick; he goes off on Dr. Hess and the BMOL’s code, saying that the code is what made him kill his best friend, and that he chooses to do the right thing and help the Winchesters. He can’t get this entire sentence out, though, before Ketch shows up behind him and shoots him in the back of the head.

Which, okay, I wasn’t expecting that, at least not this soon.

When asked what he should do now, Dr. Hess tells Ketch that he needs to, “exterminate them, every last one.” It’s unclear if she’s referring only to the Winchesters (the episode ends with a closeup of a file with “Dean W.” written on it), or all American hunters, but either way, that’s a ridiculously unrealistic task, and I’m excited to see Ketch get his ass kicked in the season finale–which, with any luck, won’t be written by Buckleming.