Supernatural seems very into writing episodes that are structured as stories within stories this season, and “Stuck in the Middle (With You)” is no different. The episode opens with Ketch looking up at the camera and saying, “So, tell me a story.”

And holy shit, does he get one.

Sam, Dean, Cas, Mary, and their hunter friend Wally are crammed around a table at a diner together, having five different conversations at once. From their waitress hitting on a slightly oblivious Cas, and Sam struggling with the diner’s WiFi password (it’s Extra Cheese, by the way), to Mary trying to go over the plan for a case Wally had stumbled upon involving a demon, the vibe the scene puts off is right out of the diner scene in Reservoir Dogs–but luckily, everyone tips in this case.

Mary reassures everyone that, “Everything’s gonna be fine,” but then there’s a jump cut to later that night: Mary’s helping a badly injured Cas into a barn, Wally’s killed by a demon, and Sam and Dean are trying to fend off everything else.

But yeah, sure, everything’s fine.

The episode is shot in a very jarring style, where we get bits and pieces of information out of context, more often than not out of order, so we don’t learn the entirety of what’s happening until the very end. Long story short, Mary’s working for the British Men of Letters, and they had sent her on assignment to steal something from the demon she and the boys are hunting; she’d framed it as Wally’s case to avoid questions from Sam and Dean.

They hole up in the demon’s house and prepare to jump him, but when they try, it’s pretty clear from the very beginning that they’re screwed. Gunshots, stabbings with the demon knife, regular old beatdowns: nothing is stopping this demon. Cas is thrown out of a window after trying to protect Mary from being attacked; the demon follows Cas outside and pulls out a massive spear, which he promptly stabs into Cas’ side.

After running into the demon with her car (very resourceful) to get him away from Cas, Mary helps him into a nearby barn. It’s clear that Cas isn’t doing well, and he’s quick to say that he can’t heal himself– something’s wrong. Sam and Dean arrive soon after, asking what the hell just happened, something Mary is very clearly wondering herself.

In a flashback, aptly titled MOTHER MARY, we see Mary go down into the basement of the demon’s house and make a beeline for a portrait of Michael. There’s a safe behind it, and she pulls out a lockbox, opens it, and grabs whatever’s inside– presumably for the British Men of Letters. More on that later.

The Winchesters are trying to figure out how they can help Cas when a wild Crowley appears with the greeting, “You idiots! You’re all going to die!”

Always an optimist, that Crowley.

Soon after his appearance, we learn that the demon Mary and the boys went after isn’t just any demon: he’s Ramiel, a Prince of Hell. In another flashback–titled MR. CROWLEY, this time–we learn that six years ago, Crowley went to visit Ramiel and offered him something that kills everything it touches: the Lance of Michael, which looks familiar because Ramiel just using it to stab Cas. In addition, Crowley also gives Ramiel whatever Mary had stolen from the box in the safe behind the painting, and an offer for the position of King of Hell. Ramiel refuses, saying that he just wants to be left alone. Crowley obliges, and Ramiel had been left alone ever since… at least until the British Men of Letters came along.

Dean tells Crowley that if he can’t help, he needs to get the hell out of there, and Crowley disappears. Instead of disappearing altogether, though, we actually find him making a plea to Ramiel. “I admit they don’t sound like much,” he says, “but every armageddon, every ‘this is the end of all things,’ a Winchester stopped it, like it or not. Never mess with what you can’t afford to lose.”

It’s a solid argument, but apparently doesn’t do much to convince Ramiel, who throws Crowley through the barn in response.

The hopelessness of the situation triggers a heartfelt speech from Cas that I watched through a tear or twelve: “You’re my family. I love you. All of you. Just please, please, don’t make my last moments be spent watching you die.” This is the first time Cas has admitted to considering the Winchesters family, to loving them, and now he has to die?!

Dean refuses to let this happen, saying they’re going to keep fighting. They manage to trap Ramiel in a circle of holy fire for a few moments, where he says that he’ll save Cas if they return what they stole from him (right here would’ve been a perfect spot for an extreme close-up on Mary). Sam and Dean have no idea what he’s talking about, and Mary stays silent, which triggers a showdown between the Winchesters and Ramiel. It gets close for a few seconds there, but Sam finally manages to kill Ramiel with Michael’s lance, which leaves them with no options on how to save Cas. 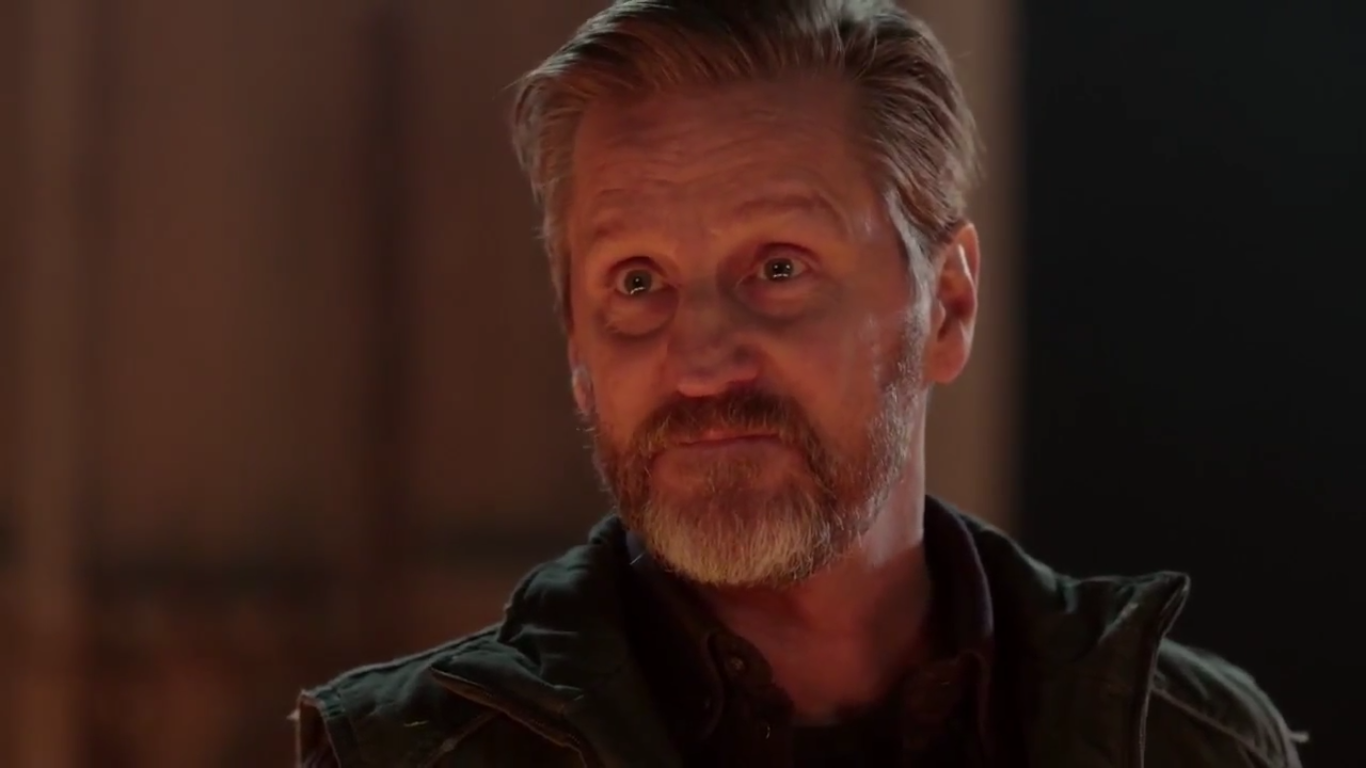 However, we’re apparently living in the Upside Down, because Crowley is actually the one who saves the day: he picks up Michael’s lance and thinks back to his first meeting with Ramiel, who had said that all of the lance’s power is in the runes inside of it. Crowley snaps the lance in half, and just like that, Cas is healed, and I’m pretty sure the entire Internet could hear the collective sigh of relief.

There was so much going on in this episode that I almost forgot the fact that it had started as a story being told to Ketch, which is how the episode ends. We learn that he’s talking to Mary, who’s furious that they would put her and her boys–she counts Cas as one of her boys, somebody hold me–in such danger. Ketch apologizes, says that they made a mistake, then has the gall to ask if he can see what she stole for them. Mary begrudgingly obliges, and we finally see the mysterious item that the whole episode has revolved around–the Colt.

It’s back, you guys.

We could’ve just ended the episode there, but we also learn a bit about what’s going on in Hell. Someone is taunting Crowley from behind bars, saying they can’t believe he’s still working for the, “Dukes of Haphazard,” and that it’s only a matter of time before they come for him next. Who is this mysterious figure, you ask?

Let me just take a few minutes for my heart rate to get back to normal, because holy shit what a good episode.

Richard Speight Jr.’s latest directorial offering was, in a word, awesome. As a Tarantino fan, all the homages to both his style–the crescending music, sharp jump cuts, and black-and-white title cards–and his films themselves–the diner scene, the slow motion walk, the way the Colt is in a black box, not seen for almost the entire episode except in the form of a glowing yellow light when people look inside, and more–were so much fun to watch, and added an extra layer of depth to an already epic episode.

The past three episodes have also been penned by relative newcomers to the Supernatural writing staff–Steve Yockey, Meredith Glynn, and Davy Perez, respectively–and each one has been such a treat to watch. I feel like a proud mom over here; these new writers have jumped feet-first into a very vocal fandom, and, to quote Ruth Connell, they slayed. I’m so happy for them that their episodes have been so well-received (deservedly so), and excited to see where they take Team Free Will next.