When we last left Supernatural before its short Thanksgiving break, it seemed that Sam and Dean had a lot to be thankful for. They–as well as their mom and Jody–had survived a haunted house at a hunter’s funeral, Dean’s relationship with his mom seems to be getting better (especially if the freakin’ adorable scene in this week’s episode of them playing Words with Friends together is any indication), and although Cas working with Crowley isn’t ideal by any means, they’re still working on tracking down Lucifer.

Things hadn’t been perfect by any means, but they were going pretty okay.

Of course, this wouldn’t be Supernatural if things stayed okay.

“Rock Never Dies” starts off with your everyday “summoning the devil in the basement” party, except that instead of a regular ritual, the two kids running it have a fossil of a feather from one of Lucifer’s wings. Lucifer shows up after being attracted by it, snaps the kids’ necks, and rejuvenates himself with the power of the fossil. It won’t completely cancel out Rowena’s deterioration spell, but it will slow it down, and right now, that’s all Lucifer needs.

Back in the bunker, Dean is playing Words with Friends with his mom, which is arguably the cutest thing I’ve ever seen, but also the weirdest–when Dean shows Sam his phone, the letters he has left to play are an anagram of “Lucifer.” He and Sam get word from Cas and Crowley that Vince Vincente has decided to reunite his band, Ladyheart, and that they think Lucifer is using Vince as his new vessel. With that, the brothers head out to Los Angeles.

On the way, we learn that Sam loves Vince Vincente and cucumber water (which Dean is disgusted by and refers to as, “vegetable water”), and that Crowley has been partners with an agent named Russell for a while now; the two of them work together to get up-and-coming musicians to sell their souls for fame and fortune. He does some detective work and confirms that Vince is indeed possessed by Lucifer, and uses his connections (“It’s LA,” he explains. “I know a lot of people”) to get himself and Team Free Will into Vince’s hotel room to investigate.

While going through the room, Cas finds a human tooth that had been pulled out by the root…which, gross. This comes back-to-back with Vince inviting his number one fan to talk with him, and has her carve his name into her chest. It’s then that Lucifer seems to fully realize the power he has over Vince’s fans– and intends to take full advantage of it through a secret concert for new fans, or “new blood,” as he calls them. Sam, Dean, Cas, and Crowley pull all the tricks and favors they can to try and find out where it’ll be held, with no luck.

That is, until Vince uses mind control on the way to the show to get Russell to kill himself with a pen.

The rest of the episode includes the other members of Ladyheart being killed, Cas and Crowley trying to distract Lucifer from going onstage, and Sam and Dean trying to get the crowd to evacuate. Both duos fail, and once Lucifer gets onstage, the only way the concert-goers are forced outside is when Dean fires his gun at the ceiling. Subsequently, we learn two things: that Sam has some intense strength–he manages to hold the venue doors open against Lucifer’s attempts to close them so everyone can leave safely–and that Lucifer doesn’t have a particular plan with what he wants to do now that he’s out of the Cage again. He leaves Vince and just like that, Sam, Dean, Cas, and Crowley are back to square one. Sam describes their situation best: “He was bad enough when he had a plan, a motive, now he’s just having fun. We’re not winning, we’re just losing slow.” 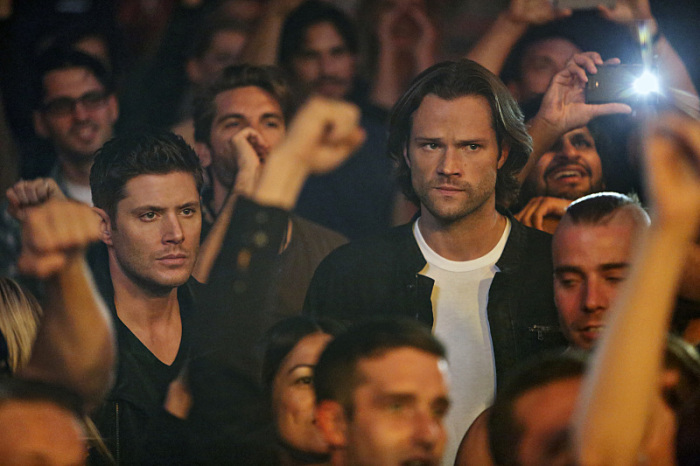 Written by Robert Berens (insert heart eyes here), “Rock Never Dies” has a very slick and snarky air about it. From the so-bad-they’re-good stock shots of Los Angeles and Russell ending conversations with his assistant with “Namaste” to Dean begrudgingly admitting his taste for “vegetable water,” Berens does a great job of capturing the fast-paced, glamorous LA lifestyle while still keeping all our favorite characters, well, in character.

This episode also heralded the return of Sassmaster Cas, who, when accused by Dean of looking like a third-tier talent agent, shot back with, “At least I don’t look like a lumberjack.” There’s also a cameo from his infamous “Hey, Assbutt” line from season five, which he says to Lucifer before slamming him over the head with a guitar. I honestly think that sums up the general tone of this episode best–entertaining, but still surreal and weird in all the best ways.

According to Lucifer, he’s planning on going, “onwards and upwards.” And with the confirmation that he has no plan, and is basically doing all of this impulsively, there’s no telling what he’ll have up his sleeve next. The midseason finale is up next, so get ready, guys–we’re almost guaranteed to be crying into our pillows this time next week.