Sound the alarm–it’s the first monster-of-the-week episode of season 12!

I absolutely adore Supernatural’s monster-of-the-week episodes; most of my favorite episodes of the entire series fall under this category, and something about their simplistic nature–Sam and Dean see an odd-looking death online, wonder if it’s a case, and head to some random town to solve said case–is like TV comfort food. For forty-two minutes, the season’s big bad is put on the back burner, the brothers go back to their roots and (usually) cast aside whatever issues they’re dealing with, and we’re treated to a good old-fashioned monster hunt.

Monster of the weeks are even better when they’re especially well done (I still refuse to believe the racist truck episode from season one ever happened, to be honest), and fan favorite writer Robert Berens brought it hard last night.

After a sweet late-night conversation with Castiel where he assures Mary that she does belong here, she finds a case–a couple is killed inside an empty, locked room with no cause of death released four days after they’d been found–and wants to check it out, which prompts Sam and Dean to go with her: a twisted family road trip, if you will. In the meantime, Cas heads to Cleveland to follow up on a lead on who or where Lucifer’s new vessel is.

Sam, Dean, and Mary arrive at the town and go undercover as FBI agents to get information from the coroner, who tells them that he does know how the couple died, but that he can’t give that information to the public because it makes no sense–they’d died from acute hypothermia in a 65-degree room, their hearts frozen solid.

While working through the case, Sam and Dean have a disagreement about their mom and whether or not she’s handling this whole situation well. Dean is sure that she’s just adjusting, while Sam insists that she’s struggling and, like he and Dean tend to do, is burying herself in hunting in an attempt to escape her fears and feelings.

Eventually, the Winchesters figure out what’s going on, and after a few possessions and being slammed against walls and a couple of salt-and-burns, they solve the case. It checks all the boxes of a classic monster-of-the-week in that sense, but the important stuff happens at the tail end of the episode–  we’ll get to that later.

In the meantime, Cas is doing his best Winchester impression in Cleveland, grilling Vince Vicente’s bandmates about Vince’s behavior, where he was last seen, whether he’d been acting odd. He also graces us with arguably the best alias in the history of the show, calling himself Agent Beyonce.

Enter Crowley, who declares himself Agent Jay-Z, and wants to team up with Cas to find Lucifer and get him back in the cage. After a bit of arguing, Cas finally agrees, and he and Crowley tentatively become the show’s latest dynamic duo.

After visiting Vince’s sister and learning that her brother had cured her paralysis, Crowley and Cas catch up with Rowena, who had managed to escape from Lucifer after casting a spell that she claimed would make his new vessel permanent, but actually speeds up the decaying process.

The Winchesters return back to the bunker, their first family hunt a success, so this episode should end on a good note, right? They’re recharged, confident, ready to find out more about the British Men of Letters.

No, of course not. Happy endings don’t happen on Supernatural.

After Dean tells her that she kicked ass during the hunt, Mary is perplexed how he could think that; she had needed them to save her, not the other way around. Dean tries to brush it off as just getting used to things, but Mary drops the biggest heartbreaker on them. 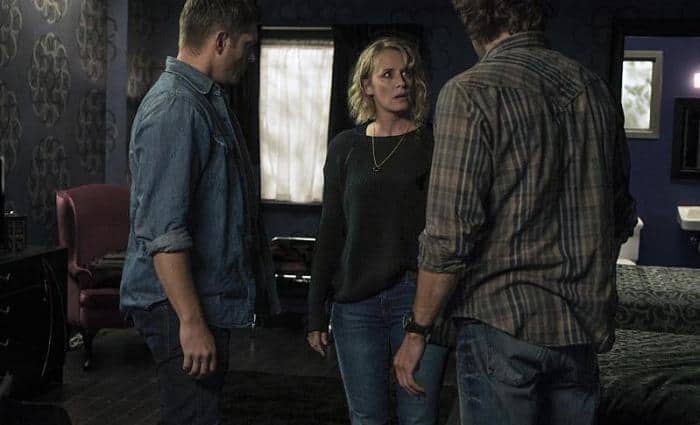 It’s clearly difficult for Sam and Dean to understand, but once Mary calls the ghost greedy and twisted, and explains the ghost’s history–after losing his own kid, he went insane and buried himself in the basement before starving to death; then, when new families moved into the house, he’d take and kill their children, too–it seems like she realizes something about her situation, as well.

As much as she tries to bury herself back into the life and pretend like everything’s normal, she can’t help but acknowledge the fact that things, well, aren’t. She tells Sam and Dean about how she misses John, how she misses her boys (at this point, to her, Sam and Dean are essentially separate entities from Baby Sam and Little Boy Dean), how she’d been in Heaven one second and back here on Earth the next. She delivers the final blow with the heartbreaking line, “Every moment I spend with you reminds me every moment I lost with them.”

The kids she had been raising, her baby Sam and little boy Dean, are gone, and her life has been flipped upside down; the world moved on without her, and that’s gotta be the definition of jarring and upsetting for anybody. It’s also gotta be jarring and upsetting to have lost your mom over thirty years ago, only to get her back and then have her leave again; Sam and Dean–Dean especially–won’t take this well, and the anxiety for how they’ll react in next week’s episode crept in before the end credits even began.

Although the scene was sad to begin with, Jensen Ackles’ masterful portrayal of Dean in that moment just tipped it over the edge into devastating. Dean didn’t say a single word, but Ackles’ mannerisms, his glances and hesitations and understated little nods as he tries to process this information, of his realization that of course his mother would leave, everybody always leaves speak volumes, were enough to make you sob into your pillow for the rest of the night, and if Twitter is any indication, that’s exactly what most of the fandom did.

Good thing we have Sam and Dean bringing back the priest getups and rocking oversized, comfy-looking grandpa sweaters next week.