A Force for Good: The Powerful Partnership Between Mental Health and Pop Culture
OCTOBER 11th, 2015 – 4:00pm

Following their groundbreaking mental health in comics panel at the 2015 San Diego International Comic-Con, Project UROK is now taking part in a panel at the 2015 New York Comic-Con in October entitled A Force for Good: The Powerful Partnership Between Mental Health and Pop Culture.
Awareness of pop culture’s power to help people with mental illnesses is reaching new heights, from celebrated depictions of superhero struggles to the personal stories of creators themselves. Join the speakers as they discuss how comics can be a force for good in mental health.
Speakers: Jenny Jaffe (founder of Project UROK), Vasilis K. Pozios, M.D. (Broadcast Thought),  H. Eric Bender, M.D., actor and writer Mara Wilson, Praveen R. Kambam, M.D., Janina Scarlet, Ph.D. (Superhero Therapy), Eisner-nominated writer Alex de Campi (No Mercy), and moderator Jeff Trexler (Broadcast Thought).
Date: Sunday, October 11th, 2015
Time: 4:00pm
Location: Room 1A24
Project UROK is a nonprofit organization whose mission is to create funny, meaningful videos for teenagers struggling with mental health issues, made by people who have been there before.
Founded by Jenny Jaffe (CollegeHumor), the site officially launched in April of 2015 and features a variety of honest, funny and relatable videos from young adults recounting their struggles with mental health. Project UROK ultimately strives to be an interactive, all-encompassing source of teen mental health resources, encouraging users to upload their own videos and share their experiences on the site’s message boards.
Among others, Project UROK features a video from Mara Wilson, a New York-based writer, performer, storyteller, and the host of the monthly show “What Are You Afraid Of?”
Watch Mara Wilson’s Project UROK video
Link to share: https://youtu.be/0LmYH0QYoic 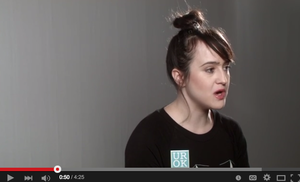 Jenny Jaffe founded Project UROK to be the resource she wishes she’d had as a struggling, mentally ill teenager. She was diagnosed with Generalized Anxiety Disorder and Obsessive Compulsive Disorder as a child, and despite the help of a therapist and the support of her family, she suffered from severe depression and panic attacks all throughout high school. She felt isolated and alone. But she got through it, and she wants to let other teenagers struggling with mental illness know that they can, too. She was hired by CollegeHumor during her senior year at NYU, sold her first screenplay at 19, and has since written forMTV, VH1, xoJane, Vulture and more.
www.jennyjaffe.com

Sarah Hartshorne was diagnosed with ADHD and ADD in college, but struggled with it long before. She’s recently been diagnosed with PTSD stemming from trauma she suffered as a child. Working for Project UROK has shown her how important it is to reach out for help when you need it. She’s best known as the plus-sized contestant on America’s Next Top Model Cycle 9, and she’s also a standup comedian and producer. She’s currently producing a documentary about plus-size modelling called Inside Skinny.