Nymiria was nice enough to send in this review that she had submitted to TripAdvisor! Sharing your reviews there is another great way to help out fellow Con attendees!

Last week I went to San Diego, California to attend Comic-Con 2013. The hotel is beside the convention center and allows you to jump right into the action. When I walked in, the staff was in the spirit of Comic-Con by wearing t-shirts from popular television shows and comic book heroes, which added a nice touch. The staff at this hotel could not have been nicer.

After checking in and receiving my room key card, I headed to the south tower of the hotel which overlooks the convention center, which came in handy for scouting the lines going into the convention center. On the way to the elevators I passed a Starbucks (yup, they’re everywhere) and a place called The Exchange, selling fresh breakfast items and quick “On-The-Go” foods. After arriving on the 24th floor, to my delight I discovered that this was one of their concierge floors. Bonus!

The hotel is beautifully decorated with high end finishes. The room is just as you see in the pictures. The view was amazing and the beds were very comfortable. The shower was large and spacious but without a bathtub, however the complimentary bath and shower products from Bath and Body Works were a nice luxury.

The service was excellent. Throughout my stay I was in need of more towels, and with a simple call they were at my door within 5 minutes. The safe in the room was handy, but too small to fit my laptop in; with a call down and a visit, they stored it with the luggage in lock-up for me. Anything I needed they were all too willing to accommodate for me. On a side note, internet costs $12.95 a day in your room. Some areas within hotel do offer free Wi-Fi.

I was somewhat disappointed with the employee who staffed the concierge desk. I asked for information regarding off-site events going on around the hotel at night, and the response I got was essentially a map and told to go exploring because there is so much going on. I would have liked something more specific.

Occasionally I could hear loud voices coming from the streets surrounding the hotel. The nearby train does make some noise once in awhile, which I would sometimes mistake for fireworks, but this is obviously not the fault of the hotel.

I didn’t get a chance to use many of the hotel’s facilities such as their pool or fitness room, as I was so busy attending the seemingly infinite events going on at Comic-Con, but I did at least visit the pool to take some pictures. The area is beautifully landscaped so that you would swear it was like you were on an island somewhere.

I would seriously consider booking a room at this hotel a year in advance of next year’s Comic Con if I had to. I was late booking my hotel room for this year and had to book through 3rd party travel planners. Hotel rooms in the area sell out quickly for the dates of Comic Con and I was fortunate enough to get a room.

I highly recommend this hotel and will stay here again for next year’s Comic Con. 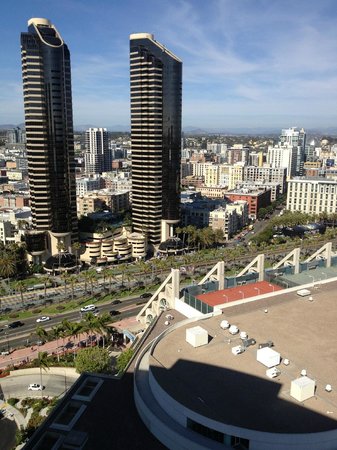