Believe it or not, this past New York Comic Con was my first. I wasn’t sure what to expect. I know some people say it’s like the San Diego Comic Con of the East Coast but I hate comparing Cons to each other. Plus, let’s be honest. Can anything really compare to San Diego Comic Con?

The Good:
It was a great crowd and there was enough to keep everyone busy. It didn’t matter if you wanted to spend your days watching panels, walking around Artist Alley or checking out booths, everyone would find something to do. The panels this year were pretty good. I mean, you can’t do any better than having an “Avengers” panel can you? But you could find panels on everything from Star Wars to TV to Comics. There really was something for everyone. The cosplay was excellent as well! I always look forward to seeing what everyone wears. I saw everything from Dr. Who to Marvel & DC to Anime. 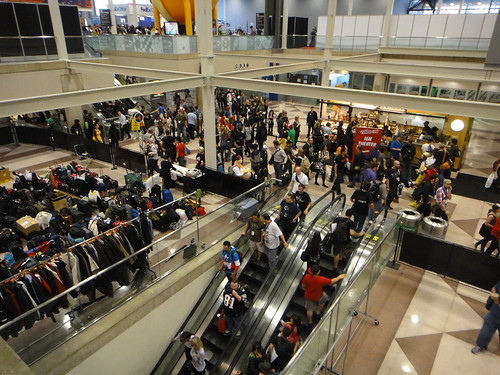 Something I noticed that I really liked was that NYCC listed on a board outside of each of the smaller panel rooms, the schedule for the day. We don’t always have our guides out and the network issues were beyond words. It was nice to be able to just sneak a peak at a sign and know if you were at the right room or not.

I really liked how Artist Alley was in it’s own little area. You didn’t have to fight with main floor booth traffic. Plus there was a good amount of space between the rows. I was able to really enjoy my time there and didn’t feel rushed or trapped.

The Bad:
The layout of the convention center is a little weird, in my opinion. There were parts I never even made it to because I had no idea they existed! I never made it to the autograph area or the children’s area. The floor was one way, IGN downstairs, smaller panel rooms farther down. It just seemed like everything was all over the place. Maybe I’m just use to the layout of San Diego Comic Con where everything is pretty much easy to get to. This was my first time attending and ever stepping foot into the Javits Convention Center. Even when using a map though I still didn’t feel like I knew where I was going.

Another issue was cell service, or the lack of it. The IGN Theater was a dead zone! I didn’t have too many issues in other areas of the convention center but I couldn’t text, call or tweet while sitting in IGN. I have no idea if it was done on purpose or if it was just bad planning and a lack of cell towers but it sucked. It’s hard to update people or just touch base with the rest of your NYCC party if you have no service.

It seemed that the questions weren’t moderated during the panels. I’ve never asked a question at SDCC but there’s always a staff member at the microphone who I’m assuming is asking what the question/comment is going to be. Granted, it seems like stupid questions/comments always get through but at NYCC it was a little crazy. There were way too many people up there just rambling on! I didn’t see any NYCC staff at the microphone to hurry people along. It seemed that it was up the moderator which isn’t really fair. They have enough to worry about without having to try and basically tell the guy who’s asking Maggie Q to marry him to shut up. Because of this I feel that not as many fan questions were asked. Hell, maybe that’s a good thing in the end with some of the stuff that was asked or said!

The Ugly:
It seemed that there were always line issues. I was in the line for Mark Hamill Friday night and it was a disaster. The line was allowed to get way too long and when they started moving people into the room, some how the back of the line ended up going in before people who were in the middle of the line. It really was a mess. It seemed that the volunteers had no idea what was going on or where the line started or ended.

Another issue was with the IGN Theater on Saturday. A large amount of us stayed in the room all day. Hey, that’s the way the Con goes plus I did want to see a majority of the panels that day. Now, at San Diego Comic Con you’re given a bathroom pass in order to use the bathroom. It’s a simple solution to a simple problem. It seems to work well and I’ve never had an issue. There’s no such think at New York Comic Con. My friend asked about it and the staff member looked at her like she had five heads. We were basically told a few times we weren’t allowed to leave the room. Really? I know it’s a choice we’re all making to sit there all day but to expect people not to have to use the bathroom is crazy. Now, some people had no issues coming and going. Maybe it all depended on who was working the door but near the end of the day I heard stories of group bathroom trips. I’m sorry, but what? Are we back in school? How does that work? Are you expected to wait for the other people in your group, who you probably don’t know? What if you only take a few moments and the cosplayer in your group is in there for 45 minutes adjusting his or her costume? I just feel that NYCC wasn’t prepared for the large amount of people who planned to camp out in the IGN Theater all day on Saturday.

All in all, I had a great time at NYCC. You can tell it’s still a freshman convention and still trying to figure itself out. They did a great job of bringing in some high quality guests though in both the comic and entertainment worlds. I feel that with a few tweaks here and there, it can be a really great convention. I won’t say it’ll be up there with SDCC but I do think it’ll be a great alternative for those of us on the East Coast who just can’t afford the time and money to head out to San Diego.

One thought on “My Thoughts On New York Comic Con”