I’m a huge fan of the Syfy show “Face Off“. If you missed the first season, it’s a show about make up special effects. You start out with a group of make up artists/designers and each week they have to complete a different task and then at the end, we crown a winner. That’s the short version anyway!

While walking around Gaslamp on my way back to the hotel one day I came across live auditions for the show. I had heard about the event but wasn’t sure where it was exactly and I had enough on my plate to begin with. I was pleasantly surprised to see that it was very assessable. It was held at what I believe was normally a restaurant that had an area open to the street, like most in the area. A semi-large crowd had gathered to watch the artist transform their models. I don’t know if there was a theme or how it all worked. I know they only had a certain amount of time to complete the task though. Here are a few photos I managed to snag: 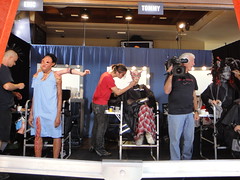 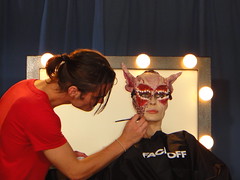 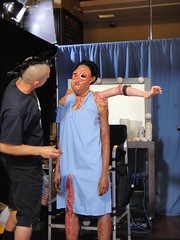 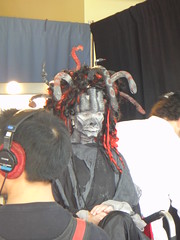 Pretty amazing right? My favorite is the 2nd creation. I have no idea what it is, but it’s awesome. I honestly think the one with the extra arm looks a little rough. I didn’t see the finish product though. Maybe it turned out better. The extra arm just looks off for some reason. I mean, it looks fake to me. It wouldn’t fool me in a movie or TV show that’s for sure.

If you want to see more photos from the auditions you can do so here. You can even vote for your favorite! You can see Syfy video of the event here.

Did anyone else happen to catch this?