I had started to write up a post about the “Being Human” panel but took too long to finish it and I figure by now you’ve probably already read posts about it. If you haven’t you can actually watch the panel here and my photos here.

Anyway, the panel was Saturday. After attending the panel I headed to lunch with Melinda and we did some other things during the day. We tired to check out the Zombie Walk but realized we wouldn’t have enough time to do that and get ready for the NBC Party. We did manage to go check out the Destination Truth Meet Up though which was awesome. After that excitement we headed back to hotel to start getting ready for the party. Hey, we’re girls and we need time to get ready! We can’t waltz into a celeb studded party looking a hot mess. While I was getting ready one of you followers (I believe it was StClaire something? Gah, I’m horrible) tweeted me saying she had just seen the guys from “Being Human” crossing one of the cross walks near the convention center. I was instantly green with envy and a little sad that I missed them. Oh well though, right? Comic Con is all about the missed encounters and near connections.

It was getting close to party time and we had been ready for awhile. At this point we were just sitting in our room waiting. We didn’t want to be too early and it was only a short walk for us. We finally decided it was time to head out. Now, I don’t know if my brain was on high alert because of the tweet I received earlier but as soon as we walked out of the hotel there was Sammy Huntington and Sam Witwer! I die. Ok, obviously I didn’t really die but this was the first time during the Con that I had a minor freak out due to a celebrity. I quickly asked if he would please take a picture and of course he said yes! He was super nice! I told him that I loved him on “Dexter” and told him that I wanted to ask a question during the panel but by the time I was ready the line was cut off. I asked him if he finds any inspiration for his character from Michael C. Hall since the roles are almost similar. They’re both characters who are trying to be something they aren’t and hide who they really are. Awesome question right? He seemed pleased with the question and maybe surprised at the quality and said yes! He actually does draw a little inspiration from Michael. I was giddy with excitement! 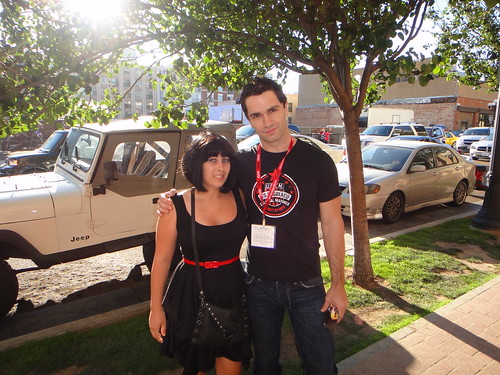 I mean, meeting Sam was very high on my list and the fact that it happened, awesome. Disney isn’t where dreams come true. That happens at San Diego Comic Con!