This was a huge surprise. I had entered a contest via NBC Fan It and received the email on either Monday or Tuesday that I had won! It was really a huge surprise because I didn’t think I stood a chance. I really didn’t enter that many times but I guess it was just meant to be! What was really exciting though was the fact that the entire When Nerds Attack family was there! Mario won his way in as well and Erin was actually working the party as a NBC Fan Ambassador which was awesome.

The party was held at 207 at The Hard Rock hotel. We arrived a little early (which lead to something awesome which I’ll share in another post) and when we checked in I was asked if I was a Fan It winner. That’s when it got really exciting. I was given a name badge and was told anything I needed to just let them know. As far as NBC was concerned we were “royalty” there. It was a weird feeling to be told that! I’m not going to lie though, it was pretty sweet to be treated like a VIP. I wouldn’t mind being treated that way once a week!

As soon as we all walked in we were asked to take a photo in front of the NBC logo. That was fun. It was almost like being on a red carpet. After that we just relaxed for a bit and took it all in. Then we made our rounds to see who we could find. Of course the first celebrity we came across was Zachary Levi. I’m not kidding when I tell you that he was everywhere that week. I think he’s found the secret to time travel. He was extremely nice and posed for a few pictures. 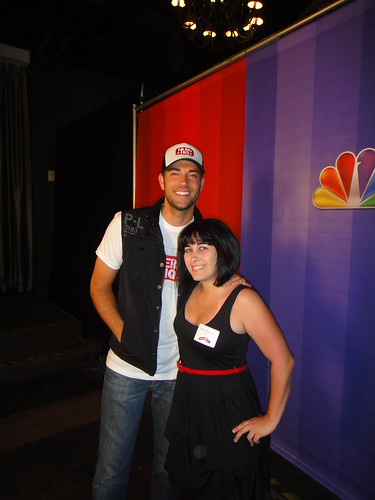 As we continued making the rounds we could tell more people were arriving. It was getting a little crowded. It was all good though because we ended up finding some of the cast of “Community.” Joel McHale was the first cast member we managed to snag a photo with. I had no idea how tall he was! Of course when you’re my height everyone is tall. Just like with every other celebrity we had met, Joel was extremely friendly. You really have no idea how these events are going to work. I’m sure at some parties you never see the celebrity guests but that’s not how it worked here. They were all mingling with us common folk. Surprisingly I was able to keep it together and not “fan girl” out on anyone. 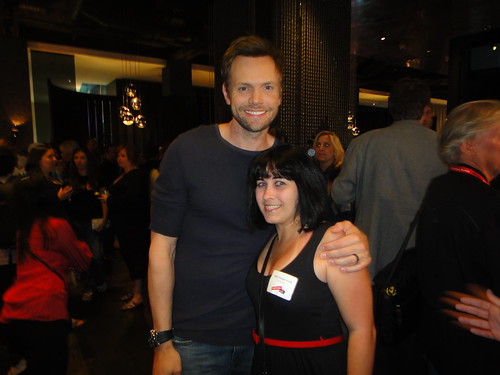 See! He’s tall and I’m short. Again, he was extremely nice. After chatting it up with Joel we managed to make our way around the bar and took another break where as soon as we sat down a waitress would ask if we needed anything. They were really on top of things! After resting our feet we went on the hunt for the elusive Chevy Chase. I wasn’t sure how it would go. I mean, he’s Chevy Chase! How often do you get to say you attended a party with a star of his caliber? Not often. Luckily we found him. After waiting for someone to stop talking (Chevy looked like he wanted the guy to stop talking too) we made our move and asked for a photo. 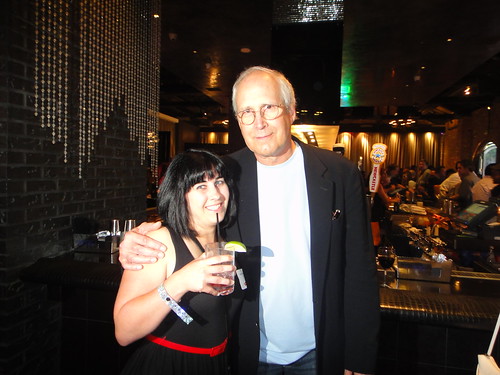 We didn’t really get to talk to him but that was fine by me. What would I even say to him? Exactly. By this time the party was really packed and it was a little hard to get around without bumping into someone. In some cases you were bumping into a celebrity! We almost had a routine down at this point. We’d find a celeb, have a picture taken and then find a seat. It worked out well for us because the next time we sat down Mario’s girlfriend Erin spotted Anthony Head. You might know him better as “Giles” from “Buffy.” I was pretty excited about this one for some reason. I waited for him to finish up a conversation and then made my move. 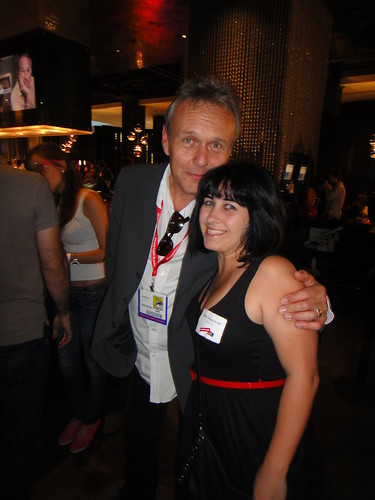 It almost looks like he’s trying to kiss my head or something. I think it’s an adorable picture though. I don’t remember having an actual conversation with him though. I did have one with David Giuntoli who plays Nick Burckhardt in the new NBC show “Grimm.” I had missed the panel and screening but did manage to see an extended preview online a few weeks before Comic Con. I knew this was going to be a show that I’d want to check out. It had the right mix of everything that enjoy. I normally like a good cop show and I don’t mind a little weirdness tossed in. 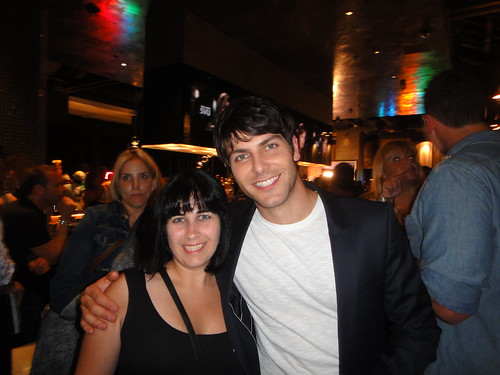 David was beyond nice. He’s pretty cute too isn’t he? Erin had pointed out that I was a NBC Fan It winner and he started talking it up. He congratulated me on winning and I thanked him and wished him luck on his new show. He was smiles the entire time which was nice to see. I think he really enjoyed being there.

I had a really great time at the NBC Party. It was great to mingle and hang out with celebrities and be treated like one myself! NBC really put together a top notch event and I hope I’m able to attend next year. If you manage to score an invite to this party, I highly recommend attending!