Instead of spending hours in line to maybe make it into Ballroom 20 to see “Psych,” I bought a pair of tickets to the “Psych Conversation” at Nerd HQ. It was only $20 and I received a ticket and an actual assigned seat! I loved it! I might be wrong but I believe the room held about 200 people, maybe less. I’m just going off the seat numbers I was able to see as I made my way to mine.

We ended up with perfect seats. We managed to end up in the 2nd row, center. I have no idea how but it was great! I didn’t have to fight my way in or run down an aisle to try and snag a seat or two. I was able to just walk in, show someone my ticket and they pointed us in the right direction. That alone was worth the $20. Did I mention the money went to charity as well? How great is that? You get to see some of your favorite stars and raise money for a good cause.

The panel was made up of Dule’ Hill, Timothy Omundson, Steve Franks and another writer/behind the scenes guy who’s name I can’t remember to save my life. James Roday was announced earlier on for the panel but had to head back to LA early. The room didn’t seem to mind though and it was just as interesting without him. I think the best part about the panel were the fans. These people were hardcore “Psych” fans which lead to some great and interesting questions. You can tell people watched the show and cared. You didn’t hear the same question over and over again like you do at some of the San Diego Comic Con panels. It was great. They shared some interesting stories as well. Did you know that Dule’ auditioned for the role that Omar Epps has on “House?” I had no idea! I know people are always cracking Dule’/Omar jokes but it was pretty hilarious to find out that they both auditioned for the same role. Steve Franks was asked if we’d see more of Buzz but it turns out he’s a big shot up in Canada which is why we don’t see him as often, he’s working too much! The same goes for Steven Weber who played the role of Shawn’s uncle in a past episode. They would love to have him back for a follow up but scheduling can be a bit of a pain.

The guys on the panel were really great to the fans. A couple were attending Comic Con for their Honeymoon! They explained that people back home couldn’t believe it and asked if they wouldn’t mind having a picture taken with them. The guys were all for it and welcomed the couple onto the stage for a quick photo. If I remember correctly they did photos with one other pair of fans. They were best friends who met because of “Psych.” I can relate because I met my best friend over our love of ‘Nsync. You remember them right? Boy band? Singing? Dancing? Ok then. It was just nice to see that 1. The panel didn’t mind and 2. That the fans in the room didn’t mind! Could you imagine trying to pull that stunt in Hall H or Ballroom 20? I think “Boo’s” would rain down! Plus I’m pretty sure if you even tried to get near the talent security would haul your ass out. It was just really nice to see how the fans respected each other and how much the cast respected and cared for the fans. I don’t think you see that enough to be honest.

Sadly, it seemed like the hour flew by and before we knew it they had to run off to catch a flight. We don’t want the new season to be delayed because of Comic Con right? They all gathered together on stage for one last photo op and then they left. I think they would’ve stayed and signed and took photos with everyone but there just wasn’t the time. It was still a great experience and I hope Zachary Levi and The Nerd HQ do something like this next year. It really was a great time, a great panel and all for a great cause. 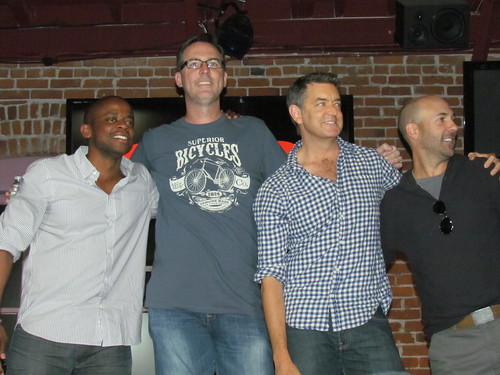 You can find the rest of my pictures from the “Psych” Nerd HQ panel here.