I’ve never been able to catch Julie Benz (“Dexter,” “Buffy,”Angel”) at San Diego Comic Con so when I saw she was attending the Philly Comic Con put on by Wizard World I had to attend. She was only there on Saturday which worked out well for me.

I was able to score a seat up close, I believe I was in the 4th or 5th row which was great. It was only Julie at the panel which was nice. You could focus on her and her career. She touched on everything from the days of “Buffy” and “Angel” to her upcoming guest spot on “Royal Pains.” She was asked a few fun questions like who was a better kisser? Michael C. Hall or David Boreanaz? She couldn’t pick one guy over the other but did pick Dana Delany as the best kisser from her stint on “Desperate Housewives.” That got a nice laugh from the crowd. She did fill us in on the end of her time on “Dexter” letting us know she only found out about the big scene about an hour before she was handed the script. Julie shared a few stories from “Saw 5” as well like the time she actually got sick before a scene and how at times she actually forgot it wasn’t real and was just a movie!


Julie talks about her upcoming role on “Royal Pains.”

The panel was about an hour long but the time seemed to fly by. You could tell she was very comfortable being in front of a crowd and enjoyed being around her fans. She fielded each question wonderfully and didn’t shy away from any. She wasn’t bothered by questions about older shows like “Buffy” and was excited to be asked about shows that didn’t make it like “No Ordinary Family.” She did mention that it would be out on DVD soon and that fans would be able to watch that first and only season over and over again.

This panel (and the other Wizard World panels) felt much more intimate then the panels held during San Diego Comic Con. Here you had a couple hundred people instead of the thousands that crowd rooms such as Ballroom 20 and Hall H. I actually enjoyed it! You didn’t have people hovering over you for your seat. You could hear and see clearly. I think the biggest thing is you had people in that room that pretty much only cared for Julie. At SDCC you have people who camp out in a room for a panel that might be three hours later. It wasn’t like that in Philly for obvious reasons. I think everyone in the room had a great time and enjoyed themselves.

Here are a few photos from the panel:

You can see the rest of the photos here.

And if you’re wondering, yes! I was able to get Julie to sign my “Dexter” poster: 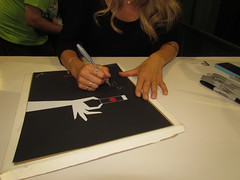 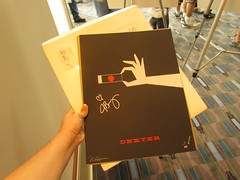