I asked around on Twitter for some hotel reviews from Comic Con. Mark was the first person to respond and I’m greatful for this great review! Thanks again Mark! If you have a review you want to submit feel free to email me at deargoodbyeATgmailDOTcom. 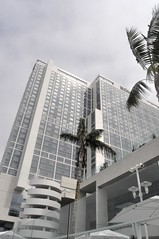 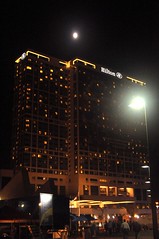 Hilton Bayfront – Incredible location, but is it worth it?

After having previously enjoyed Comic-Con while staying in the Gaslamp Quarter, a ten- to fifteen-minute walk away from the San Diego Convention Center, imagine my glee when I learned my con partner and roommate had caught an upgrade this time, grabbing a room at the Hilton San Diego Bayfront. Directly across an access road from the con, in a practically brand new hotel, seems like the ultimate win.

A couple of weeks later, after the dust has settled, I can say it was great to be nearby — but the Hilton Bayfront didn’t live up to my expectations of a top-notch hotel. We’ll look at some of the pros and cons, and you can make your own call.

Location, location, location. Without a doubt, the Hilton Bayfront is a great place to be to enjoy the con. The only more-convenient spot is the San Diego Marriott Hotel and Marina (you can skip crossing the street), and with the sharp increase in con programming at the Hilton’s Indigo Ballroom this year, it made for an easy commute. Having the hotel so nearby also made popping back to the room for a camera lens, or a nap, a possibility.

Great food. This new Hilton has set out to create a dining experience featuring the freshest food possible, including local and organic ingredients where available. The effort shows, and while the hotel restaurant food isn’t inexpensive by any stretch of the imagination, it’s not out of line for downtown hotel fare. I especially liked the panini made with artisanal meats, roasted red peppers, and local greens.

The Fox Sports Grill actually is on the affordable side, makes a great burger, and has attractive outdoor seating; and look on the bright side… the room service prices will make the $7 sandwich from the Starbucks downstairs seem downright cheap. One nice surprise was that the Hilton set up a couple of stands selling breakfast burritos in the morning and hot dogs for much of the day, during the con, for very reasonable prices.

It’s snazzy. This is a new hotel, just a couple of years old, and it shows. The building is in great shape, the elevators work, and the guest rooms and furniture, if somewhat generic, are comfortable.

Pool with entertainment. I’ll be honest, a pool and hot tub are key features of any hotel for me, and after a long day at the con, relaxing in the hot tub for a few is a nice perk. The hot tub is genuinely hot, which isn’t always true at a hotel, and the cool pool is great for alternating. The outdoor facilities here mean you’re out of luck if the weather’s bad, but your odds are pretty good during the summer in San Diego.

The Hilton even has a massive TV screen out at the end of the pool deck, on which they were running sci-fi all weekend. (I’m betting they switch to sports most of the year.)

It’s pricey. Let’s get that out of the way up front. You’re paying for the premium location and the fancy hotel. Rooms may be available for as little as $149 on random off-season nights, but not during Comic-Con, when the convention rate is $278 before taxes. (Taxes take you over $300/night.) Book a non-con-rate room to get around SDCC’s lunatic booking system, and you’re looking at $500 and up, if you can find one.

Expensive Internet. If you’re not a frequent traveler, you may also be taken aback by the discovery that the more expensive a hotel, the less likely its Internet access is included in the room rate. (The same goes for breakfast.) At the Hilton Bayfront, the fee’s an even-steeper-than-usual $13.95 per 24-hour Internet session, whether wired in your room or using Wi-Fi through the hotel. (Rates more commonly run $9.95-11.95, and for $12.95, most Marriott hotels give you not just Internet access but unlimited local and long-distance phone calls.) A “premium” Internet offering is available for 19.95, touting faster connection speeds.

Brought your own Internet with you? Half of the hotel’s rooms face away from the SDCC, and thus away from the nearby Verizon Wireless and AT&T cell towers. AT&T signal on the south side of the building is particularly poor, so count on dropped calls and iffy net connections. On the north side, expect four or five bars, but poor performance at the peak of the con.

Snazzy’s not always better. They’ve been popping up everywhere, but I’m not thrilled with hotel-room alarm clocks featuring faintly backlit LCD screens that can’t actually be read in the middle of the night. And the boxy, compartmented, wooden bathroom vanities are pretty, but bathrooms still need towel racks.

Shabby service. Perhaps most surprising of the negatives at the Hilton were the multiple examples of poor service. I can be pretty patient, and I recognize that a science fiction convention swamping a hotel isn’t the best of circumstances, but I expect better at a top-of-the-line Hilton. After delaying my roommate’s check-in for hours with the excuse that they had no feather-free rooms ready, they still had to send housekeeping to change out the bedding after she got to the room. When I asked that a loudly squeaky bathroom door, guaranteed to wake a sleeping roommate, be fixed, I should not have had to wait two days and then find a can of WD-40 to do it myself. And in a half-empty hotel restaurant for lunch, the wait staff were surprisingly inattentive.

If you can get a room at the Hilton San Diego Bayfront, you don’t mind the premium prices for a room you’ll probably just sleep in, and you’re willing to accept that the snazziest of hotels drops into barely-keeping-up mode when a big con’s in town, go for it. The location can’t be beat.

But if you don’t mind walking several blocks (or taking mass transit) to and from the con, or would even appreciate that separation from the crowds, there are less-expensive, often roomier, and perhaps more reliably served hotel rooms available in the Gaslamp Quarter and beyond.

[Bio]
Mark is a repeat Comic-Con attendee and a long-time attendee of several east coast cons like Shore Leave, I-CON, and Dragon*Con. He’s also an IT specialist at Cornell University and editor of 14850 Magazine in Ithaca, New York.