It’s safe to say everyone who goes to Comic Con hopes to run into a celebrity or two. The reality is it’s really easy to run into someone while walking around Downtown or while checking out the Exhibit hall. Of course the easiest way is to attend a photo op or autograph session. I happened to do both!

Saturday was the big “Celeb” day. I was pretty excited and looking forward to it. The first person I met was James Marsters. You might know him as “Spike” from Buffy. He’s had roles on other shows too like Smallville and Caprica. He was very nice and talkative! I told him this was my first Con and he gave some tips and what not. He even told me about the first Con he went to as a fan. I’d have to say he was the best celebrity during this trip. I like him even more now! Later in the day around Noon I actually had a photo op with him which was really awesome. He was signing at the Lightspeed Fine Art booth and I noticed someone else I liked down at the end of the table. Eddie McClintock! He played Agent Sully on Bones and he’s one of the stars of the new SyFy show Warehouse 13. I went down to the end of the table and had him sign something as well. I told him that I loved him on Bones. He told me he wanted to bring some Bones related photos but they have to ask permission and all that. He was really nice too. (Pic 1: James Marsters Pic 2: Eddie McClintock) 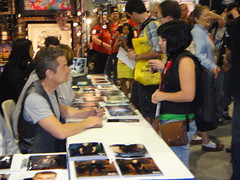 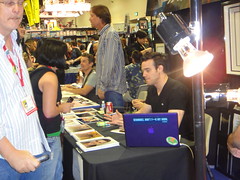 My 3rd celebrity encounter on Saturday happened when I stumbled upon the line for the LL Cool J signing. Yes, that says LL Cool J. My friend and I didn’t even know he was going to be there until Thursday or Friday when I checked the CBS Comic Con website via my phone. We thought it would be awesome to meet him but we weren’t sure it would happen since we found out about it late and what not. Well, it happened. We didn’t even have to get there early! I’d say we only waited in line for maybe 30 minutes. He was signing at the CBS booth since he’s on “NCIS:LA” and was really nice. I honestly can’t remember what I said to him. I was too busy staring and what not. I did notice his arms are the size of my head. Melinda and I thought about singing “Doin’ It” to him but once we got up there it slipped our minds. 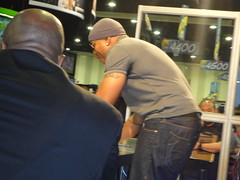 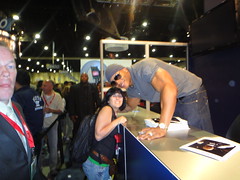 The last signing of the day was the CBS Techin’ Out On TV group. I was really looking forward to this because Pauley Perrette from NCIS was going to be there. You might know her better as Abby. We actually waited in line for about 2-3 hours. I didn’t want to miss it plus we were tired of walking around. The signing finally happened around 2:45 and it still took forever to work through the line. Along with Pauley, Anthony Zuiker (CSI creator) and Barrett Foa (NCIS:LA) were signing as well. The line as I mentioned before was a little crazy. I think they allowed too many people and the fact they had three people signing at once I think made it worse too. Unlike with the LL signing they didn’t have time to do a little photo with them. They actually had post it notes that they wrote your name on and they’d hand it to the stars. That way they could start signing your photo before you made it to them. Pauley was super sweet. Of course I told her that I was Abby for Halloween last year. She asked if it was awesome and I told her of course! 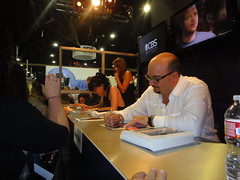 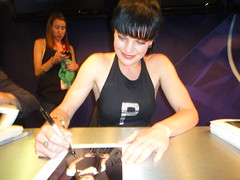 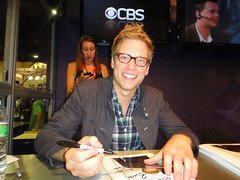 I’m pretty sure I passed a celeb or two while just walking around but I didn’t notice. Really, unless you’re looking for a celeb I doubt you’d notice them. The truth is I might have been looking right at one but didn’t know who he/she was!