Here’s another right up from Melinda! This time for The Big Bang Theory.

Barb asked me to write up a review/synopsis of The Big Bang Theory’s panel….but I just don’t even know where to begin! So many things happened that I get excited every time I remember that I was there.

First things first, I am a HUGE Barenaked Ladies fan…have been for probably half my life…give or take a year or two. When I watched my very first episode of The Big Bang Theory (I’ve never missed one by the way), and heard their theme song – I knew that it was meant to be for me! THIS was my show!

Back in September, during our exasperating vacation planning (which let me tell you, is EXTREMELY hard when there are states in between you and the other people) we found out that the Barenaked Ladies were going to be having a concert in San Diego at the same time we’d be there for Comic Con. As much as I was dying to see them, I couldn’t afford the ticket prices. It made me sad, but I knew I’d get another opportunity to see them. Then I made a playlist (plug for Playlist.com) of all their songs and had myself a mini concert at my desk.

Anyway, BBT’s panel wasn’t until late afternoon, but we knew it would be a popular event, so Barb and I got up even earlier than the previous day and still we were further back in line. Not too bad though. At least we were inside!

The panels before Big Bang’s are a blur to me. I don’t remember them…at all. The first thing I remember is the “Room Monitor” (not an official title, but it works) coming over the PA system and asking everyone to take their seats as then the real fun could begin.

You try telling seat vultures to sit down.

Anyway, after a few moments I start seeing what looks like a road crew setting up a mic stand and some other equipment. Personally my first thought (because I was so excited my brain was clouded) was that the cast was going to sing “Soft Kitty” which is a fan favorite song. Don’t lie, you know the words!

Barb leaned over and said, “Hmmm I wonder…” and then my thoughts really ran wild. What if, the Barenaked Ladies were there. We both got the same look in our eyes and had a mini-squee session followed by a massive texting campaign to every living-breathing soul we knew expressing our uber excitement.

Gathering our senses, we busted out our cameras ready to snap away at the pictures and record video.

Soon, the staff was handing out the words to the theme song. Still there had not been an “official” announcement, but there was no doubt in my mind.

Sure enough, after dragging us along a few minutes more, Wil Wheaton came out. Evil Wil Wheaton. He introduced us to …. The Barenaked Ladies! SQUEE!

So, Ed Robertson takes the mic and exclaims how excited he is to be at Comic Con and that his inner nerd is at an all time high. He made some great jokes and then said they thought this was a great opportunity for a sing along! After we got our starting note, we were off! It was great to just be a part of something so cool with 5,000 of my closets fellow fans and the Barenaked Ladies and Evil Wil Wheaton. LOL

Again, my mind went into a blur. Too much fangirl excitement. The cast came out, I remember that. I also remember asking if Barb had ever seen Jim Parsons (Dr. Sheldon Cooper) give an interview before. I warned her that some of his mannerisms are no different than his characters. Sure enough it, this was the case.

The cast talked about dealing with down time on set and their great Ping Pong Tournament. We also heard how Carol Ann Susi, who provides the voice of Howard’s mom (she’s hasn’t been seen yet) was so amazed to be recognized by the sound of her voice. (If you’ve ever seen the show, you know what we are talking about.) Both Bill Prady (writer) and Simon Helberg do outstanding impersonations of her.

Speaking of Simon Helberg, I didn’t know that he got his start as an improv actor. Fun fact.

There were a few questions asked, but the one that stands out in my mind is when a young girl, stood up and asked “Who on the cast is your best friend?” The cast, of course had a little fun with this question asking Wil if he had set the girl up or if it was perhaps his child…since he’s Evil and that was an evil question. They never did actually answer it though.

There was a person that stood out as well. One of the audience members came dressed as the Doppler Effect and brought along his Luminous Fish. It was good for a chuckle.

The cast was a riot, as were the writers and Wil Wheaton. I don’t think I laughed as hard during any of the other panels…It was a blast to be there for this one and I’m soooooo lucky we got in as there was still lines forming outside.

Oh, and we did all sing “Soft Kitty” as well. It was special. 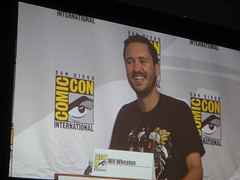 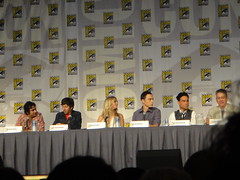 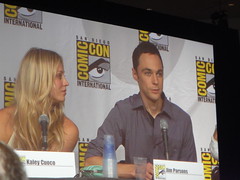 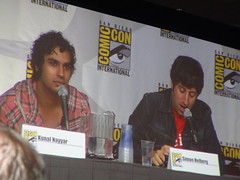 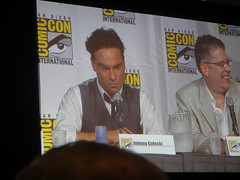