I love the show “Bones.” It’s not your typical crime drama. It has a nice balance of comedy and drama plus the interaction between the cast is amazing. You can tell they enjoy what they do and that they enjoy each other. This was proven even more when Emily Deschanel (Dr. Brennan) and David Boreanaz (Special Agent Booth) took the stage during the Bones Comic Con panel. Oh yeah, they were joined by Hart Hanson. I felt like poor Hart was a dad sitting between two kids who wouldn’t leave each other alone. It was cute!

Emily wasn’t announced to be there and was a surprise. She took time off from filming in order to make it. I think this helped the panel be more entertaining. Don’t get me wrong, I love me some David B but it always makes a panel better when you have more of the cast there. Before Emily came out David talked about being at Comic Con for Buffy and Angel and he really seemed excited to be there. He actually dropped the F bomb a few times which was pretty awesome. He was talking about the leather pants his character Angel had to wear and how the ladies just some the leather pants. Once Emily made it to the stage she kindly reminded David that the card on the panel table mentioned that some people might be under 18 and to keep an eye on the language. It was cute.

As far as the show goes they dropped a few spoilers, some that you might have already heard. Agent Booth will have a new love interest on the show. This drew a round of boos from the audience. We learned a character will be killed off as well! No word on who but it’s someone we know. I’m thinking maybe one of the rotating interns? Hart Hanson talked about The Gravedigger a little and said he saw the character as the Anti-Brennan. They’re both very smart and capable women but one took the good path and well, one took the evil. I can certainly see where he’s coming from and agree. Emily did say she feels that her character might now realize that hey, maybe she did miss out on something with Booth. I think the adding of a new interest for Booth is going to definitely add something to the show. I love when Bones gets jealous and gives her educated backhanded compliments.

Kathy Reichs made a little surprise apperance as well. She’s the author of the Temprence Brennan novels and the show is based on her life, not on the books. If you have a chance to check out some of her books you should. I received all of them for Christmas and found them to be very easy to follow (for the most part) and hard to put down.

While I enjoyed the panel due to the interaction between Emily and David it would’ve been nice to see more of the cast. I know it’s hard to work out schedules since some shows are filming during the Con but even someone who has a semi-regular role, like one of the rotating interns, would’ve been nice. All in all thought it was a pretty good panel! 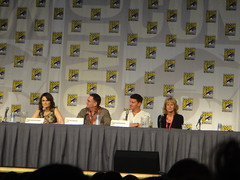 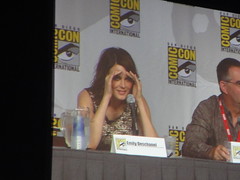 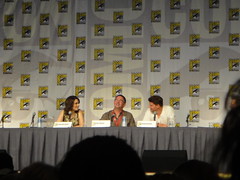 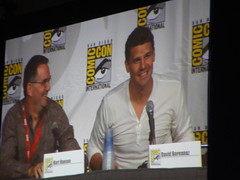 You can see more pictures from the “Bones” panel here.